"The most detailed catching resource ever created" is now even bigger, better and more advanced... Illustrated with over 400 photos—many of Major League catchers—the book covers everything coaches and catchers at every level need to know in regard to:

A Message From The Author,
Coach Jerry Weinstein: A lot of people are asking: "What's new in the 2nd Edition?"

Well, the short answer is A LOT... Here's the longer answer:

When I wrote the first edition of The Complete Handbook of Coaching Catchers, it took me about 5 years to complete... and with most any book, especially a technical one, by the time the book is done, much has already changed on the subject. It then took about a year to get it published and it's now been out for over 7 years...

Given this time frame and with the strong emergence of data & technology and its rapid application into the game of baseball, it's safe to say that the catching position as well as the game as a whole, has changed drastically. When Covid hit, it provided me a unique opportunity to dig in and develop the 2nd edition of the book to update it and make it reflect the state of the catching position in today's game.

The 2nd Edition of The Complete Handbook of Coaching Catchers now features more than 50 pages of new, updated content. A lot of this is around the data and technology that we as coaches and players now have at our disposal, and how we are using it to evaluate performance and how we quantify receiving, blocking and throwing.

With this, a lot of time is spent around the One-Knee Stance, as its wide acceptance is arguably the biggest development in the position over the past several years. Not only do we discuss the one-knee stance in terms of receiving, but we also show how it can be used in blocking and throwing, and what the advantages/disadvantages are for each.

There are many other skill techniques that have changed as well which are discussed in the book, such at the tag play at home plate. This rule changed tremendously as a result of the Buster Posey injury, and now the tag is taught completely different.

The pitch calling section of the book was also heavily updated, as the way we are attacking hitters in today's game is much different. You now are seeing many pitchers working more North and South, Front and Back to get hitters out with less emphasis on East and West... The strategy and reasoning is discussed in detail.

There is also a lot around throwing and using the same data and tech that pitchers are thoroughly utilizing, like spin rate and true spin, to evaluate and improve throwing from behind then plate.

Lastly, there are many new drill and skill progressions introduced in the book to teach the new age of catching...

This is just a little bit of the new, advanced catching information featured inside the 2nd Edition.

As the game continues to evolve, more and more rapidly, I will continue to devote my time and energy to staying on the cutting edge and try to be the best resource I can to coaches, players and parents.

Click the button to order the upgraded, 2nd Edition of The Complete Handbook of Coaching Catchers today and SAVE 30%!

Here's What Others Are Saying About 'The Complete Handbook of Coaching Catchers'...

"Jerry is one of the best catching instructors I had. He taught me the details that helped me eventually get to the Big Leagues -- and stay. Jerry has taught at every level of baseball and has worked with countless numbers of players who have had success. I have a ton of respect for him and his knowledge."

"Jerry Weinstein is one of the best catching instructors in baseball. In this book, he has succeeded in breaking down  the fundamentals of the position in a way which is easy to understand and apply to a young catcher. From his analysis of the mechanics of catching to his innovative drills, this book is a must-read for catching coaches and their athletes."

"Jerry Weinstein is one of the most efficient, hardest working and knowledgable coaches ever to take the field. He has all the necessary tools to teach the game."

Get The New & Improved 2nd Edition Of The Complete Handbook of Coaching Catchers!

(In Stock, Ready To Ship)

Choose Your Deal Below... 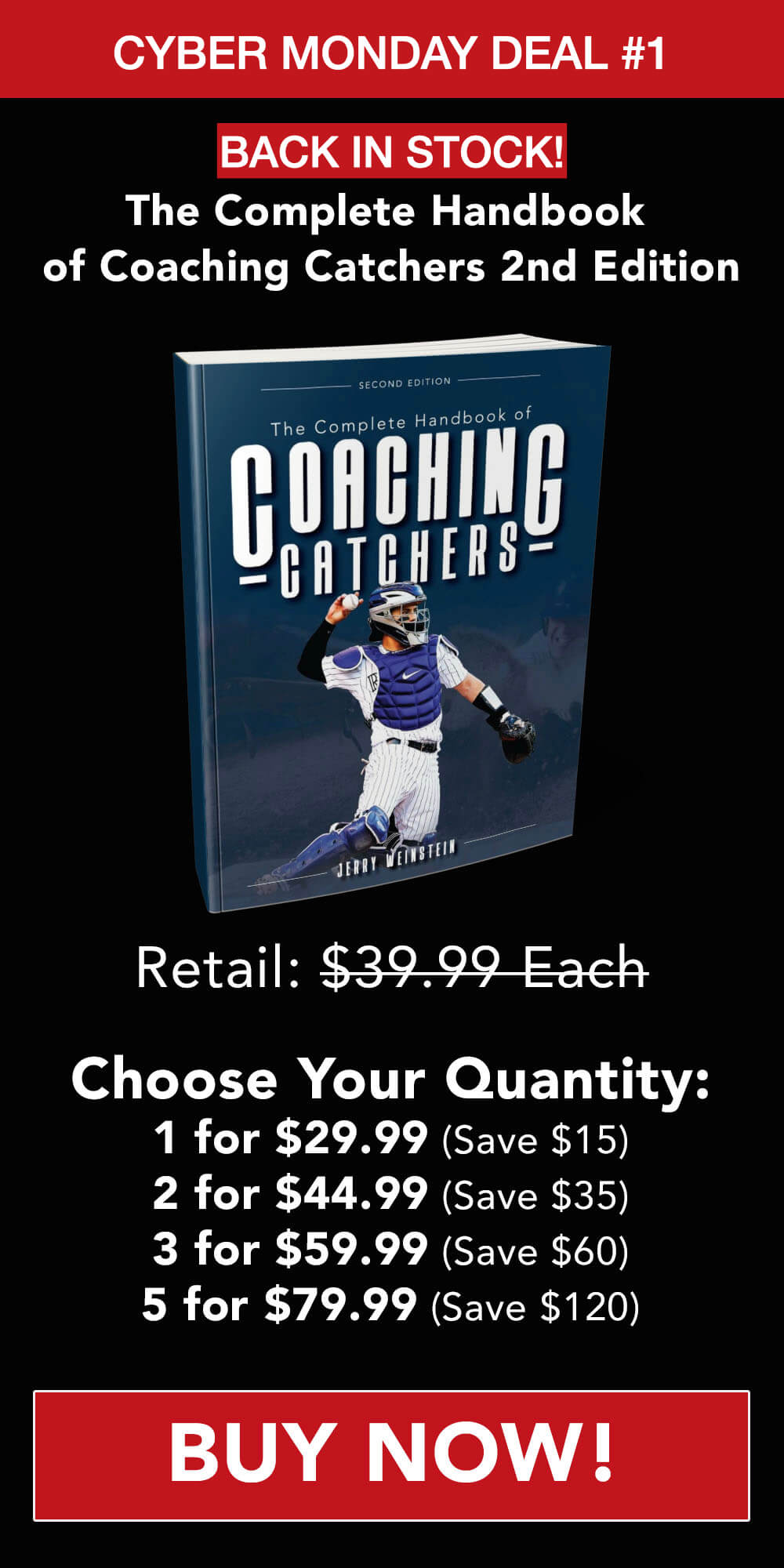 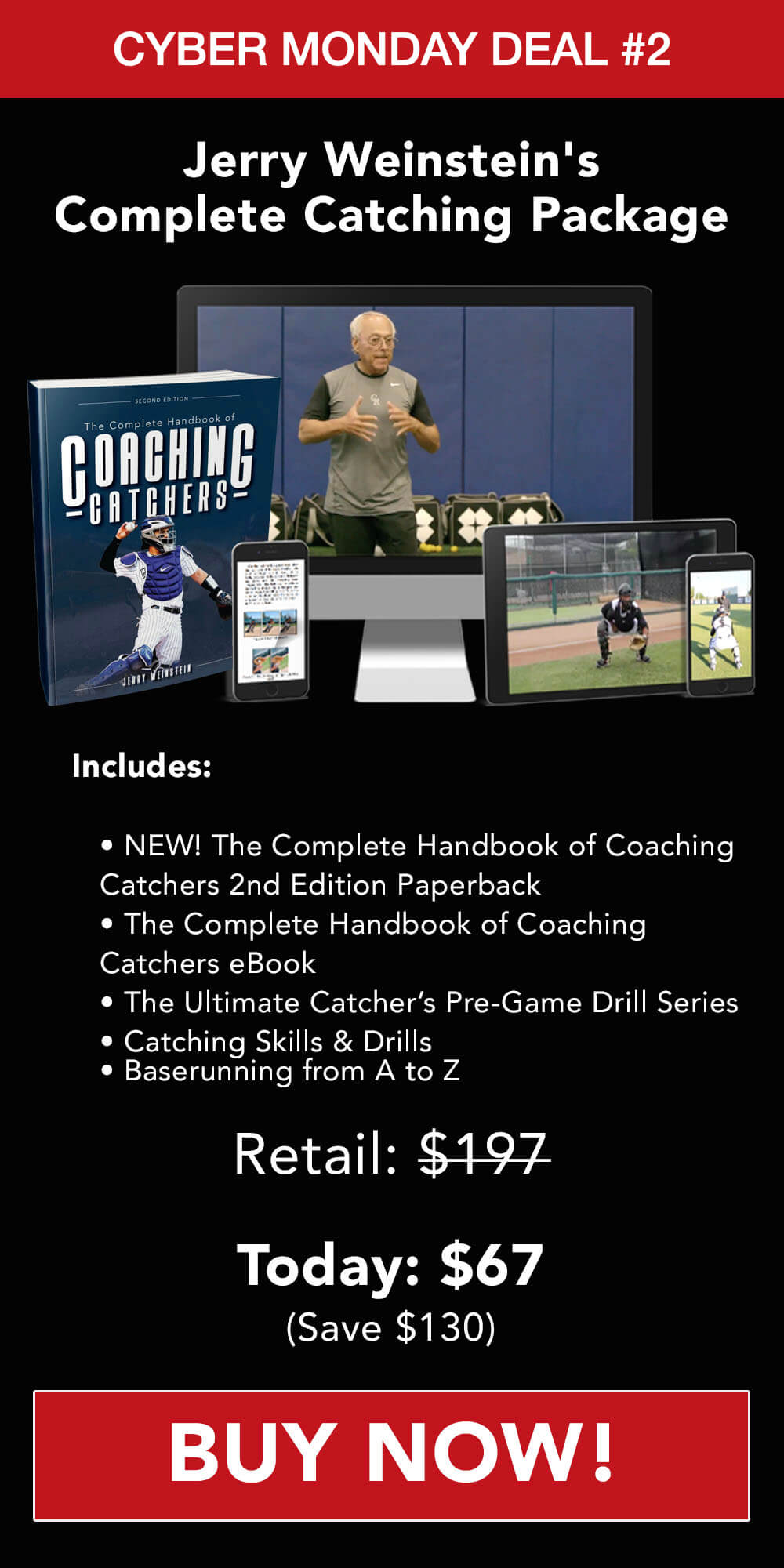 Books are back in stock, ready to ship, but we have LIMITED QUANTITIES REMAINING...

⬆️ PICK YOUR DEAL ABOVE ⬆️