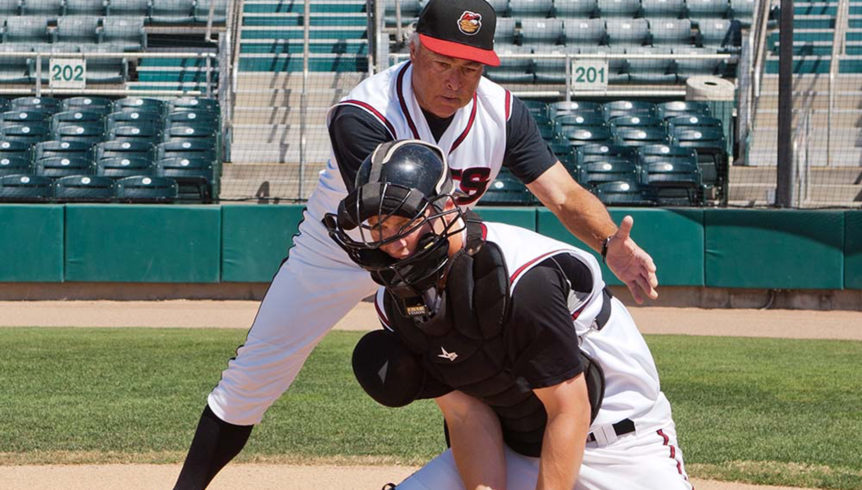 Blocking the ball in the dirt is an all-the-time thing (e.g., games, bullpens, and between innings). The catcher needs to do it right every time, all the time. The task requires a great deal of self-discipline, as well as mental and physical toughness. As such, it can be very easy for a catcher to take the path of least resistance and ‘ole’ balls in the dirt with no one on base and less than a three-ball or two-strike count on the hitter.

Blocking the ball in the dirt is a conditioned response. For most people, their natural response to a fast object coming at them is to dodge it and get out of the way. As such, catchers have to retrain their natural instincts through countless repetitions.

Here are 6 of the blocking drills I use with catchers:

In this drill, the coach stands approximately 10 feet in front of the catcher and points to balls in the dirt in various locations with the end of a fungo or with a ball on a stick if he has one. Either the home plate area should be used, or a throw-down plate can be placed in front of the catcher. Initially, the drill starts out by making this exercise a form-blocking drill, in which the catcher and the coach evaluate the catcher’s blocking position and technique. Next, the exercise can be turned into a quickness drill. In this option, the catcher quickly gets back to the plate and into his receiving stance after each block and is ready for the next ball in the dirt. The exercise can be transformed into a form-block-and-retrieve drill, as well. Another variation would be to convert the exercise into a combination-receiving drill. In this option, the coach points to the balls in and out of the strike zone, to which the catcher moves his glove in response. Subsequently, the coach will mix balls in the dirt into the drill, which is a more game-like approximation of what happens during an actual game.

Using a fungo or a ball on a stick, the coach stands two steps in front of the catcher and puts the ball or bat down as he is walking backward. After each block, the catcher snaps or pushes his way back to the center line. Not only is this drill designed to develop quickness, more importantly, it enhances the ability of the catcher to gain ground on balls in the dirt by cutting off the ball as close to the point of impact as possible.

This drill is good because the catcher can work on it on his own. The drill involves hooking a bungee cord or strong tubing with a belt on the opposite end into the fence. The catcher puts the belt on and form blocks with resistance and assistance to all three directions (right, left, and straight on). When the resistance is pulling him in the direction he wants to move (assisted blocking), he should get a feel for his range, as well as for what it feels like to accelerate his body. When he works against the resistance, he is building those muscles that are directly responsible for moving him in a specific direction. He also gets a feeling for what muscles he needs to involve to best execute the desired movement. He can measure his improvements on a daily basis by measuring how far he is able to move. He can also time how long it takes him to get to a particular point, from his first movement until he lands with both knees.

This drill is the same as the live-blocking drill except it involves using a machine that allows the catcher to pinpoint locations where he might need extra work on a specific pitch. The machine is especially good for a double-block, breaking-ball drill. After the catcher blocks the first breaking ball, he holds his position and tries to block the next breaking ball from a knees-down position. In all likelihood, the second breaking ball will not be in the exact same spot or take the same bounce as the first breaking ball. As a result, the catcher will be forced to maneuver his upper body to block the second breaking ball. This effort helps to prepare the catcher for breaking balls in a game that comes up on him or unexpectedly goes to one side or the other after he has landed. It may be a good idea for the catcher to wear football linemen forearm pads to protect him in all machine-blocking drills.

This drill is just a variation of the live blocking drill, except it involves having the catcher block balls off a fungo bat. On game days, a few fungo blocks and tags in the infield during batting practice can serve to help get the catcher ready for the game.

(excerpt from The Complete Handbook of Coaching Catchers)